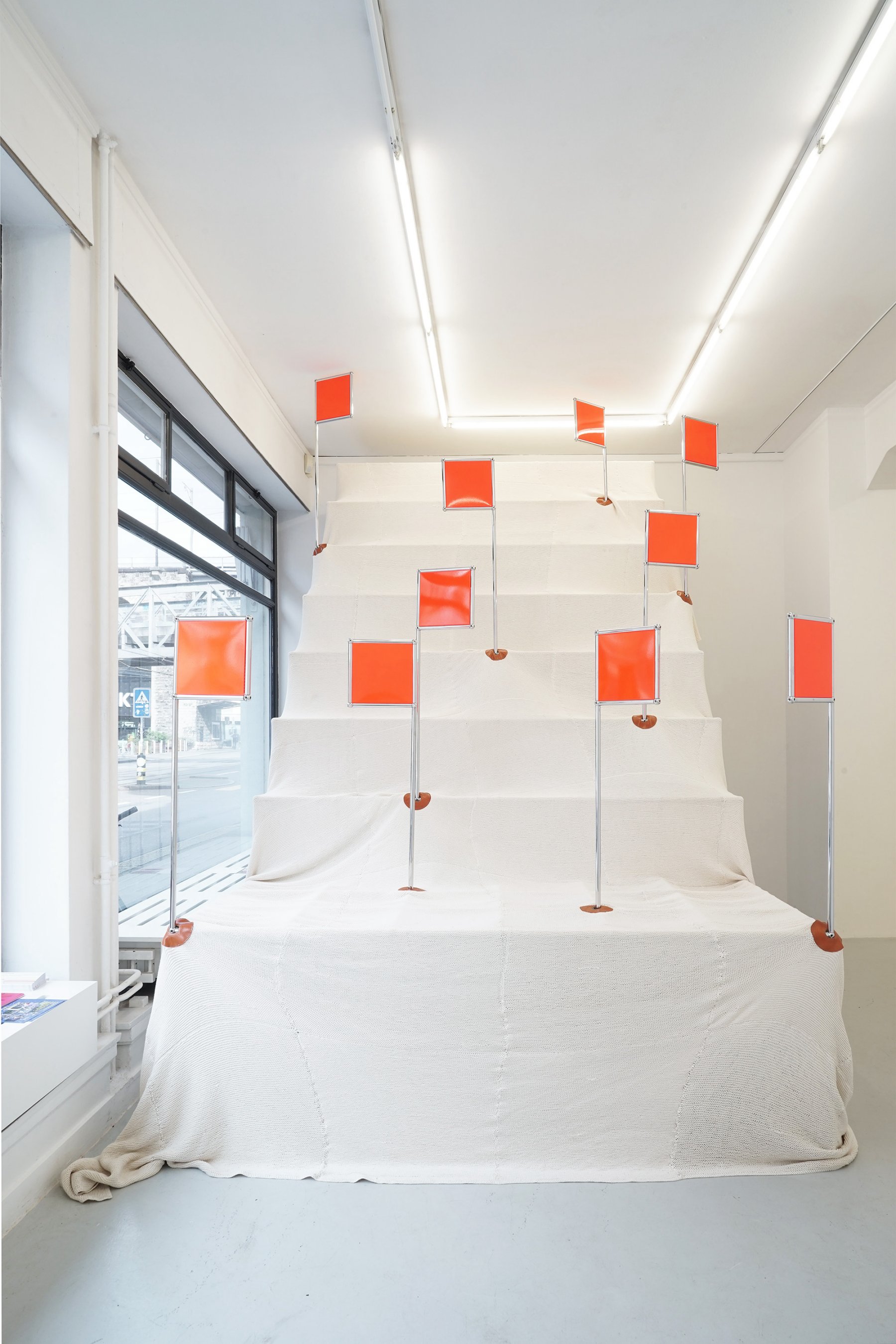 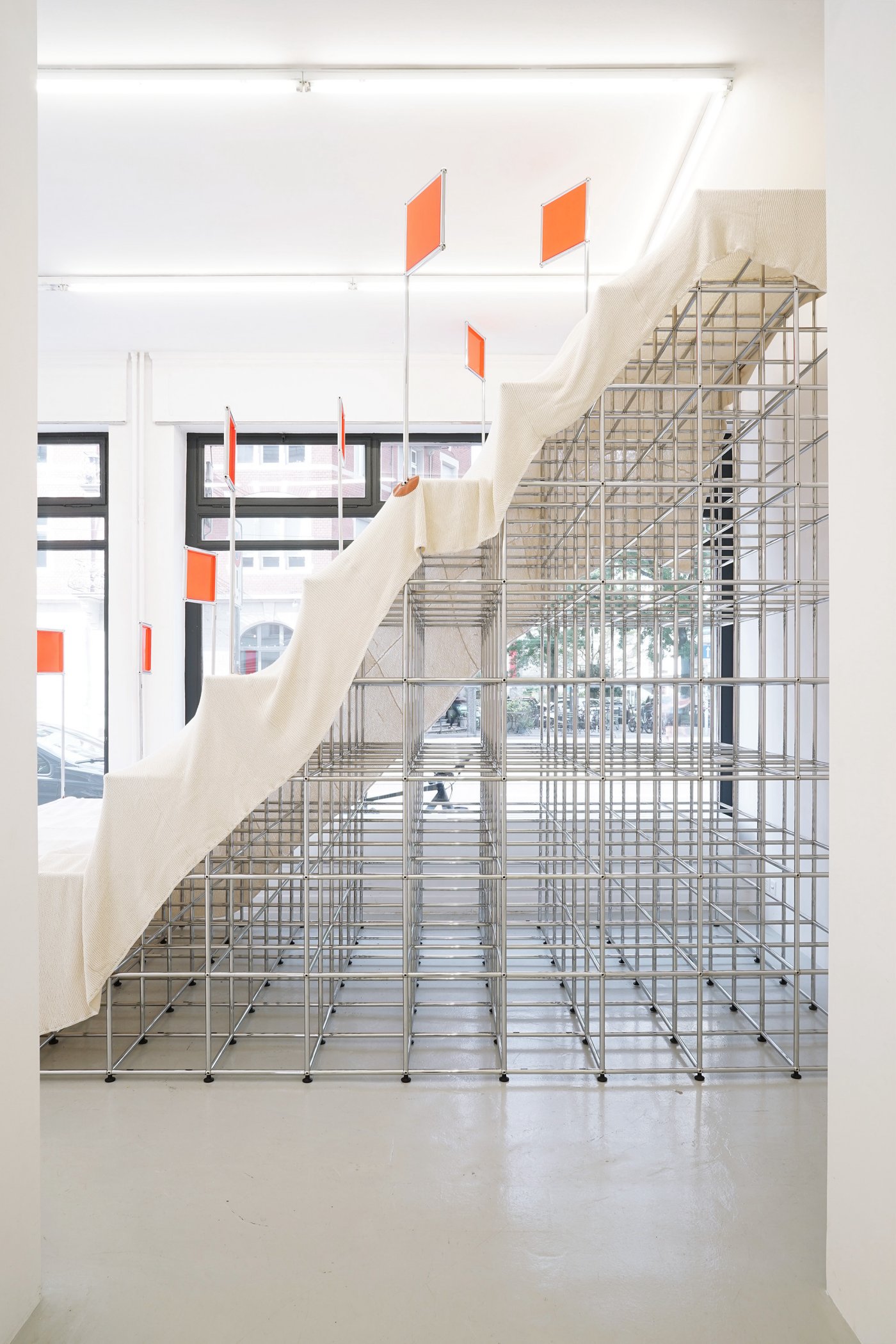 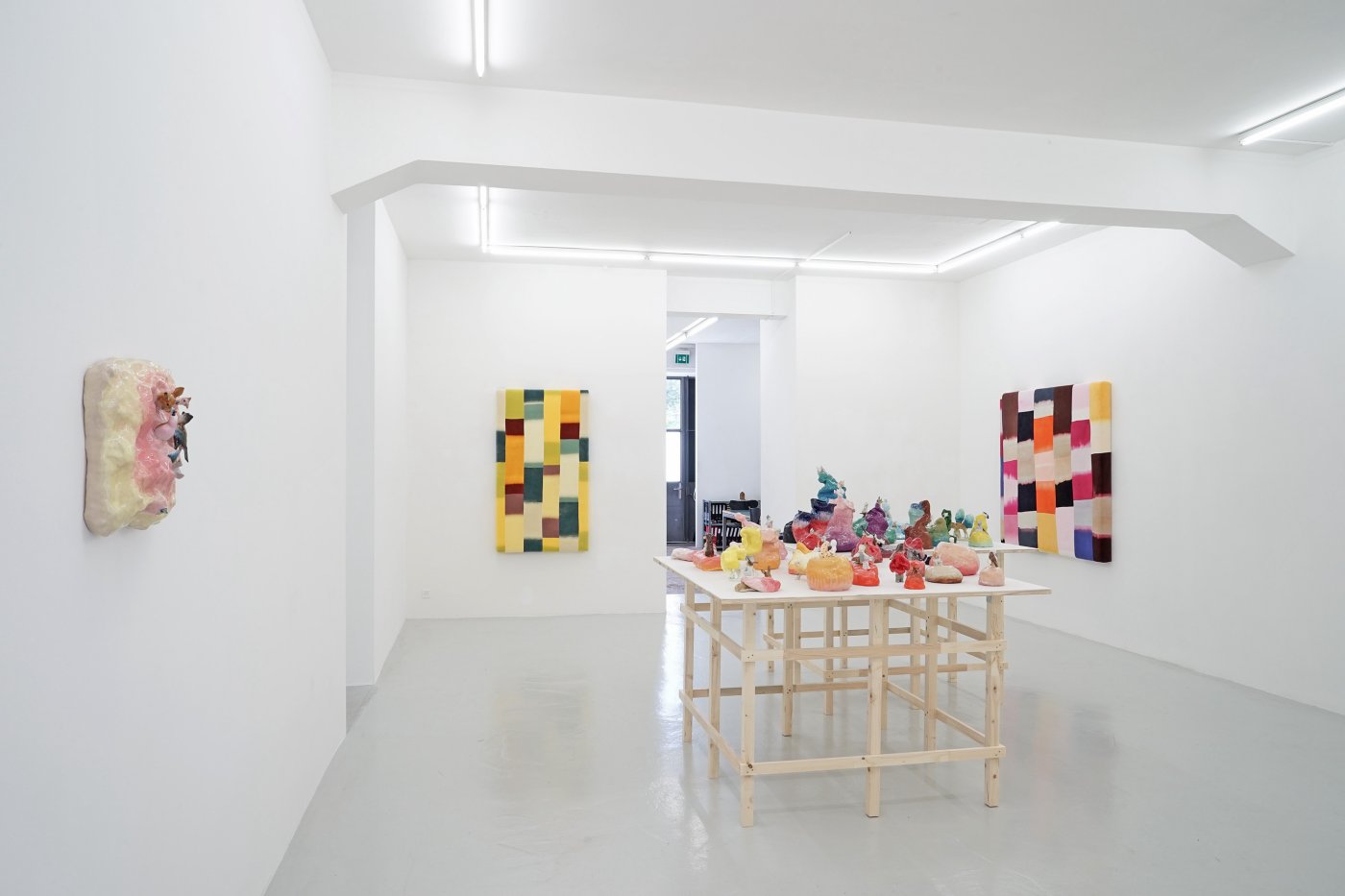 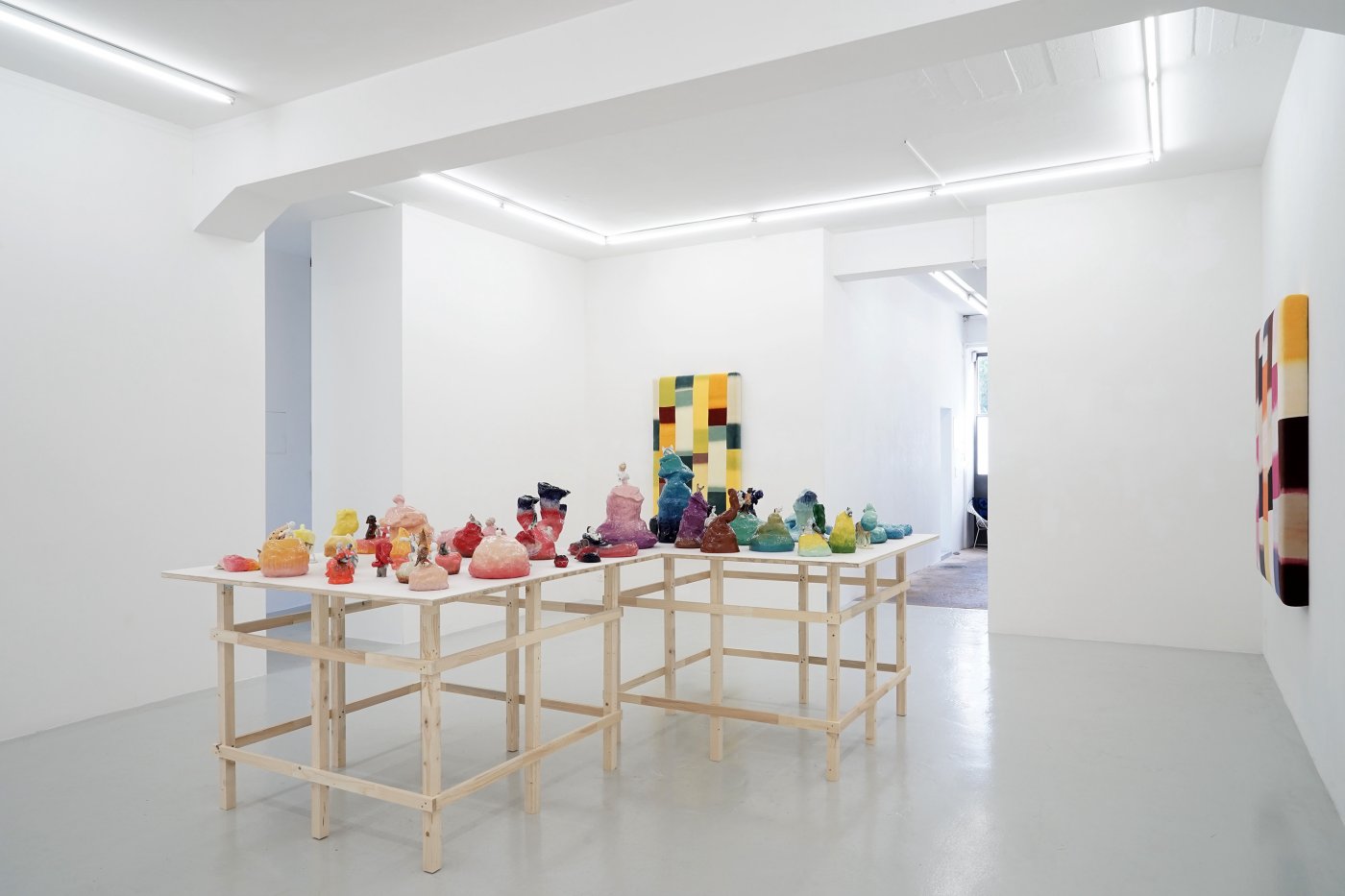 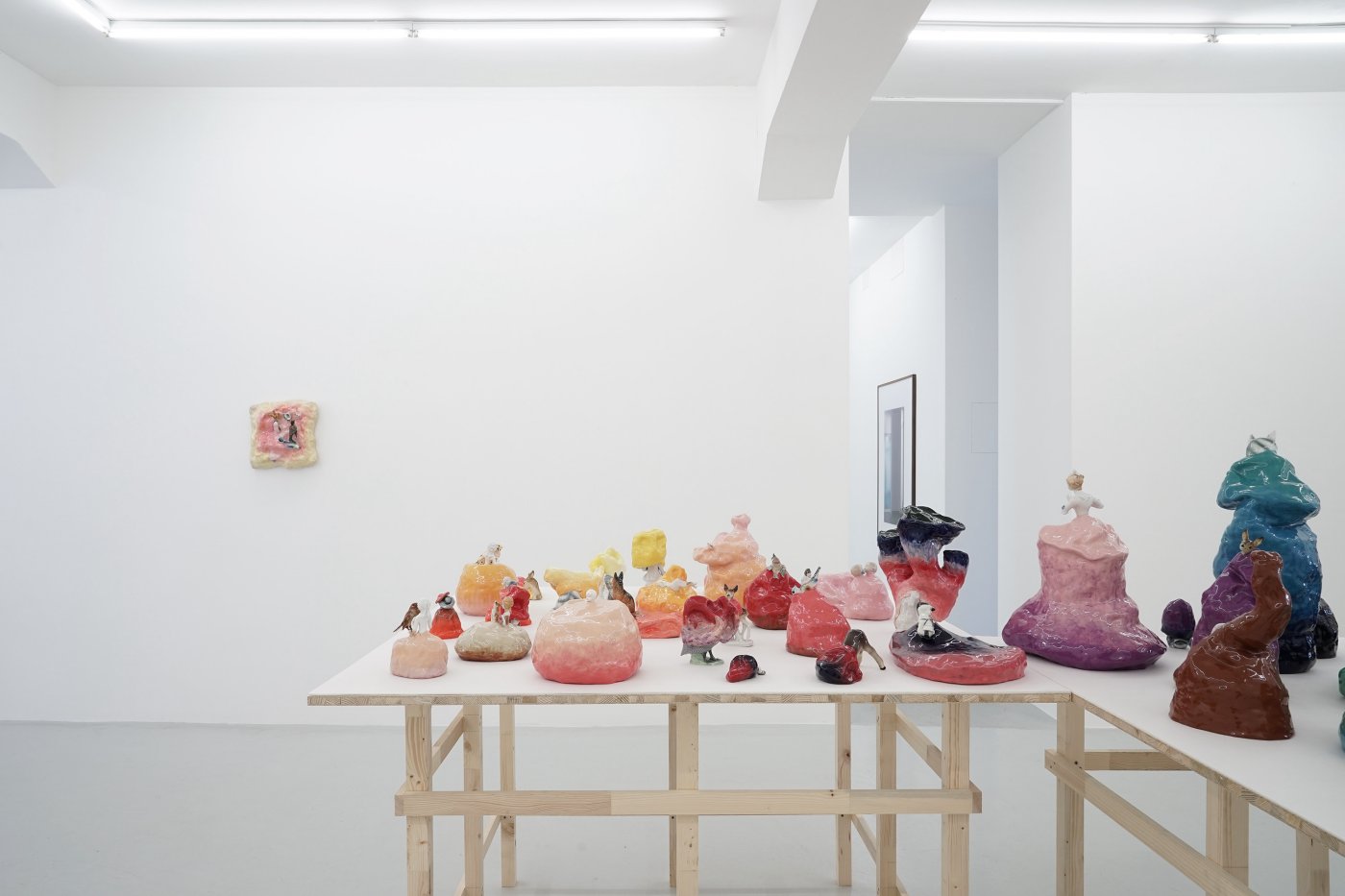 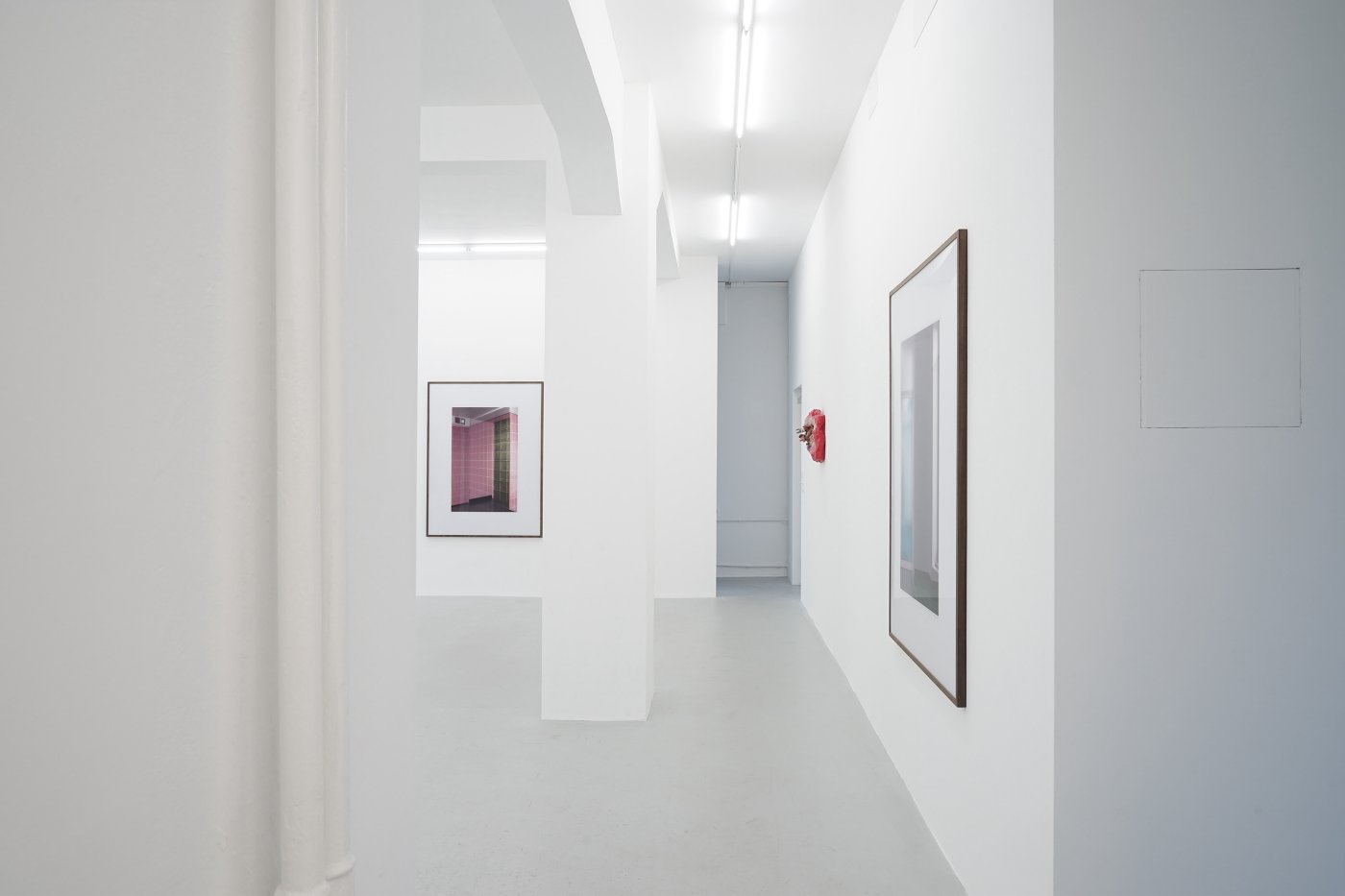 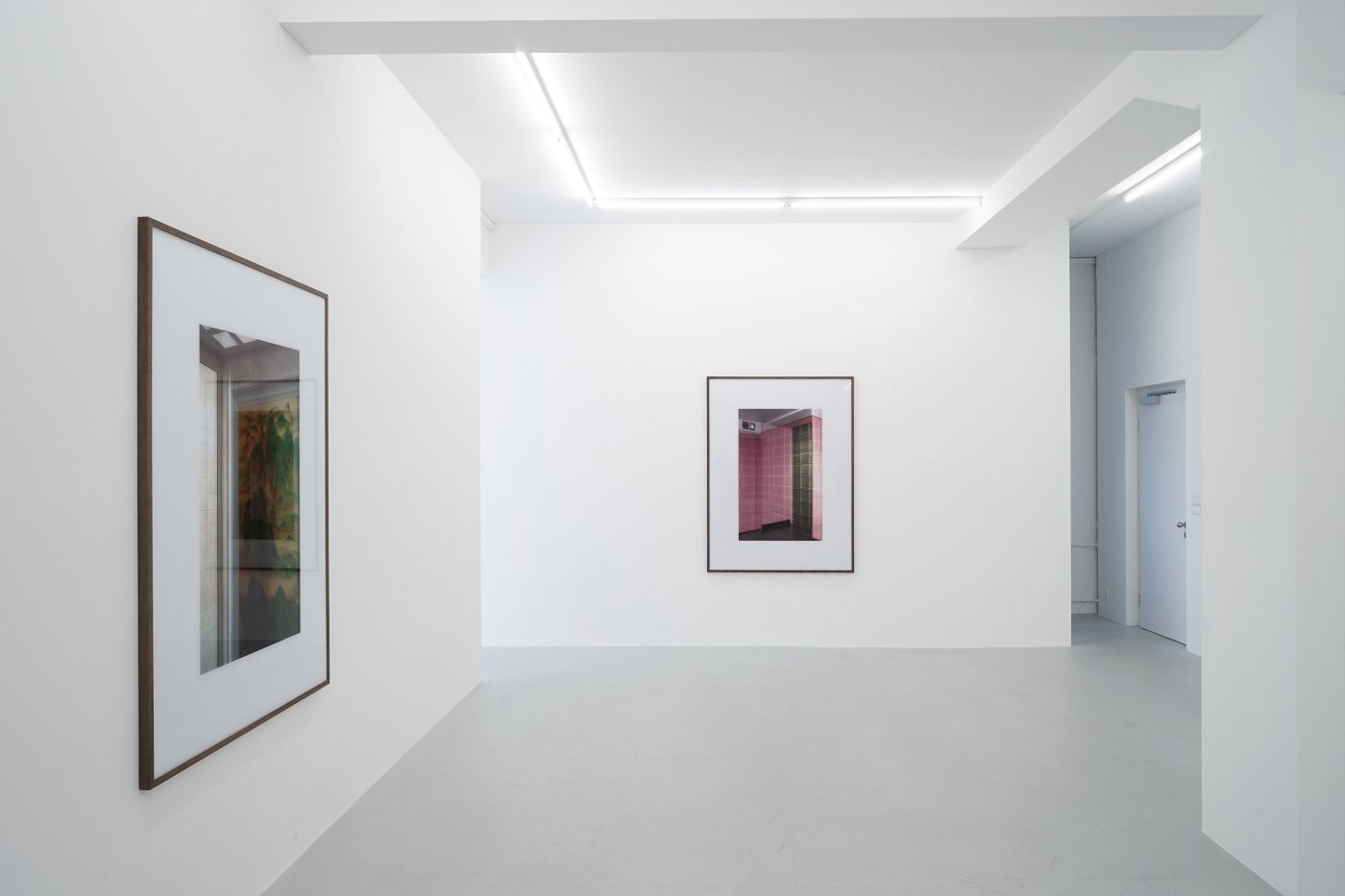 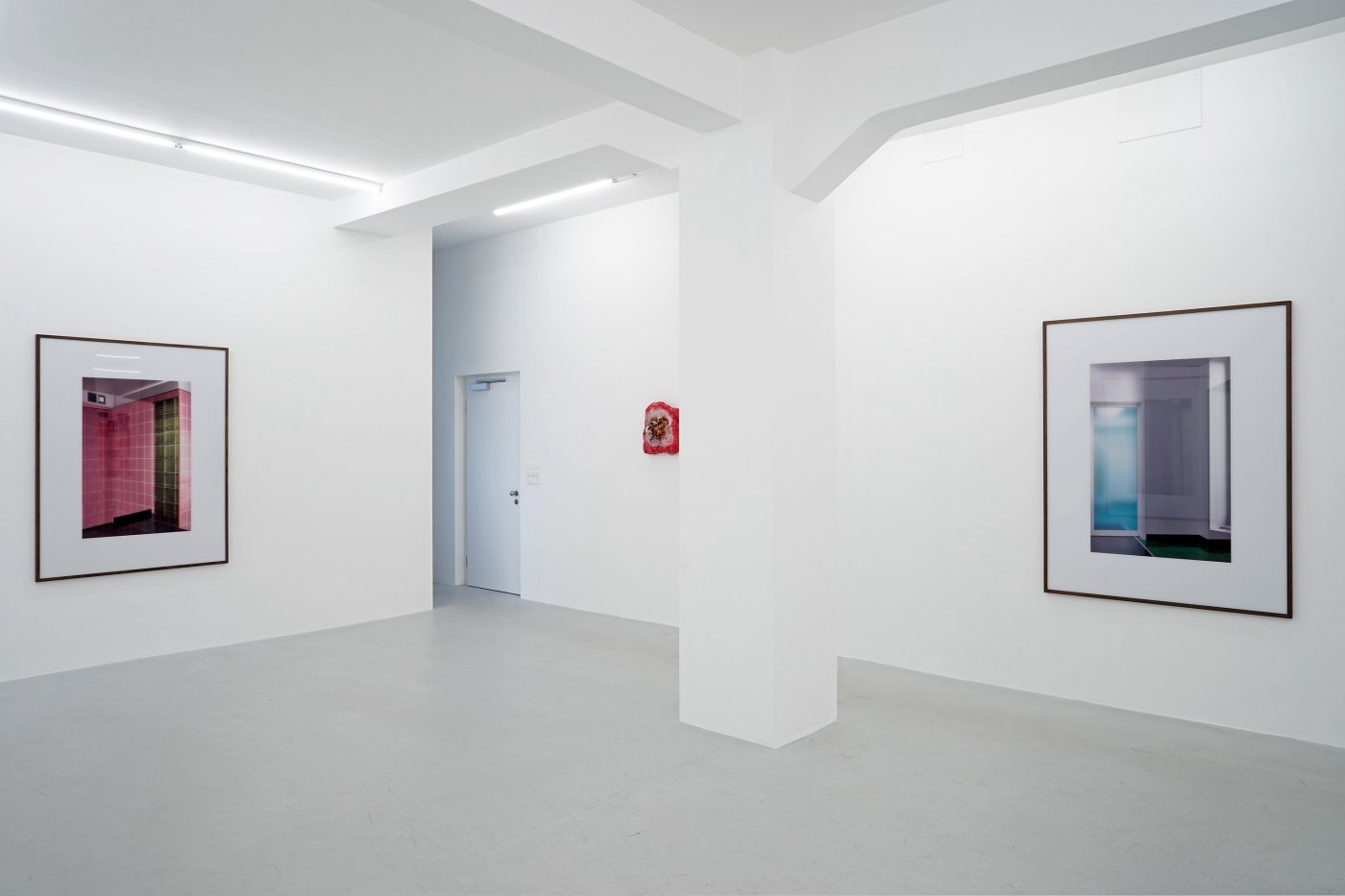 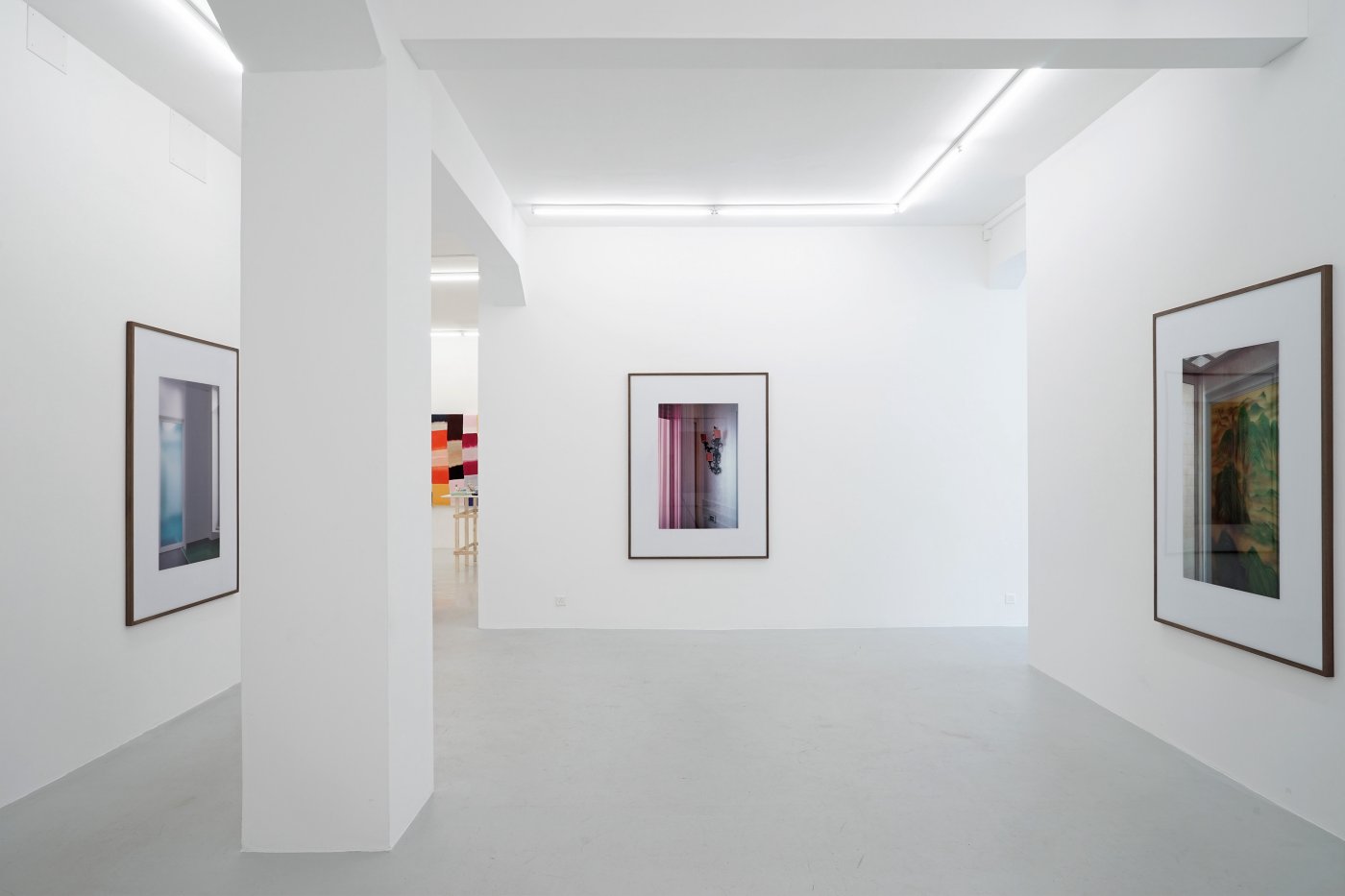 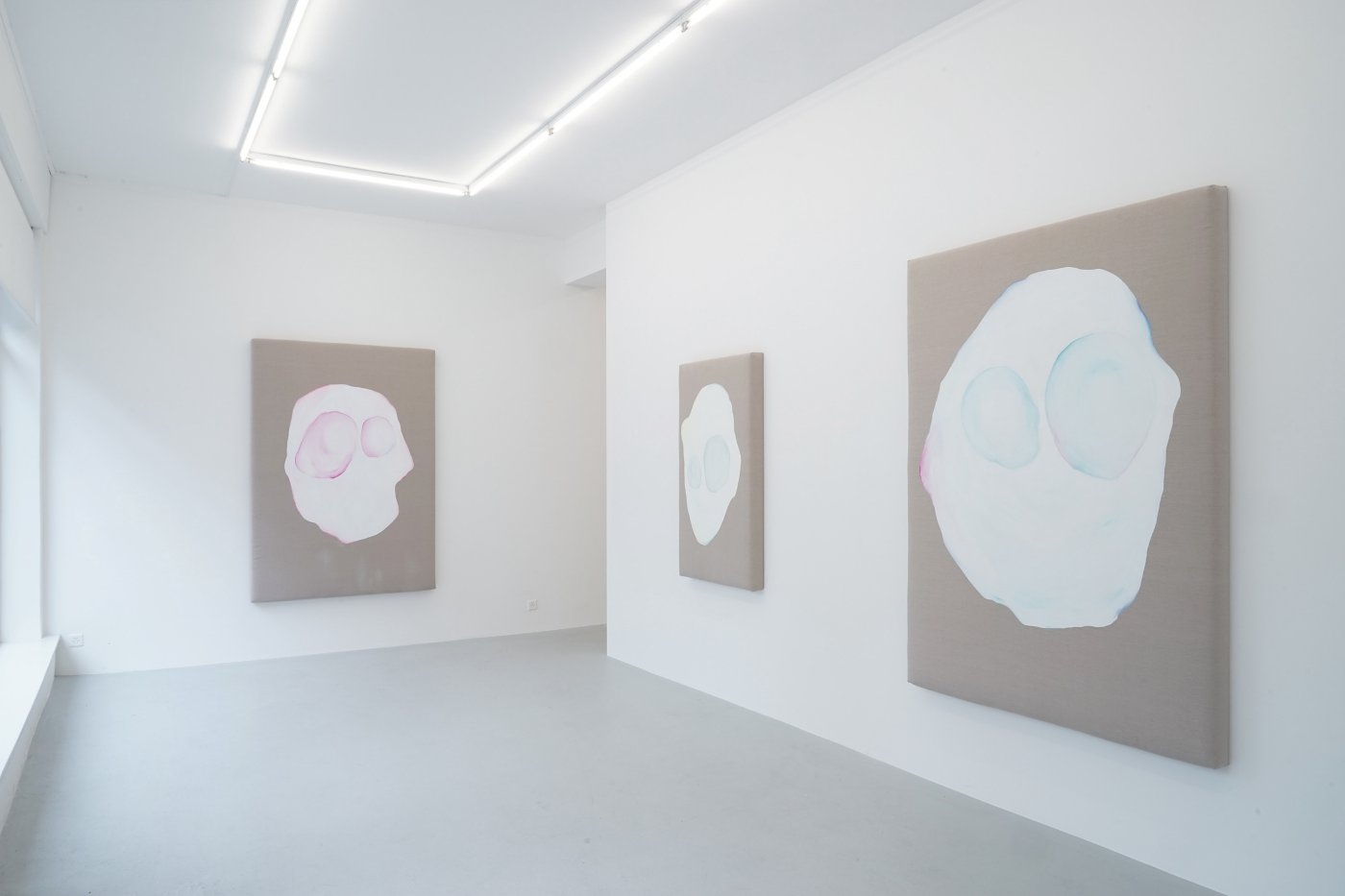 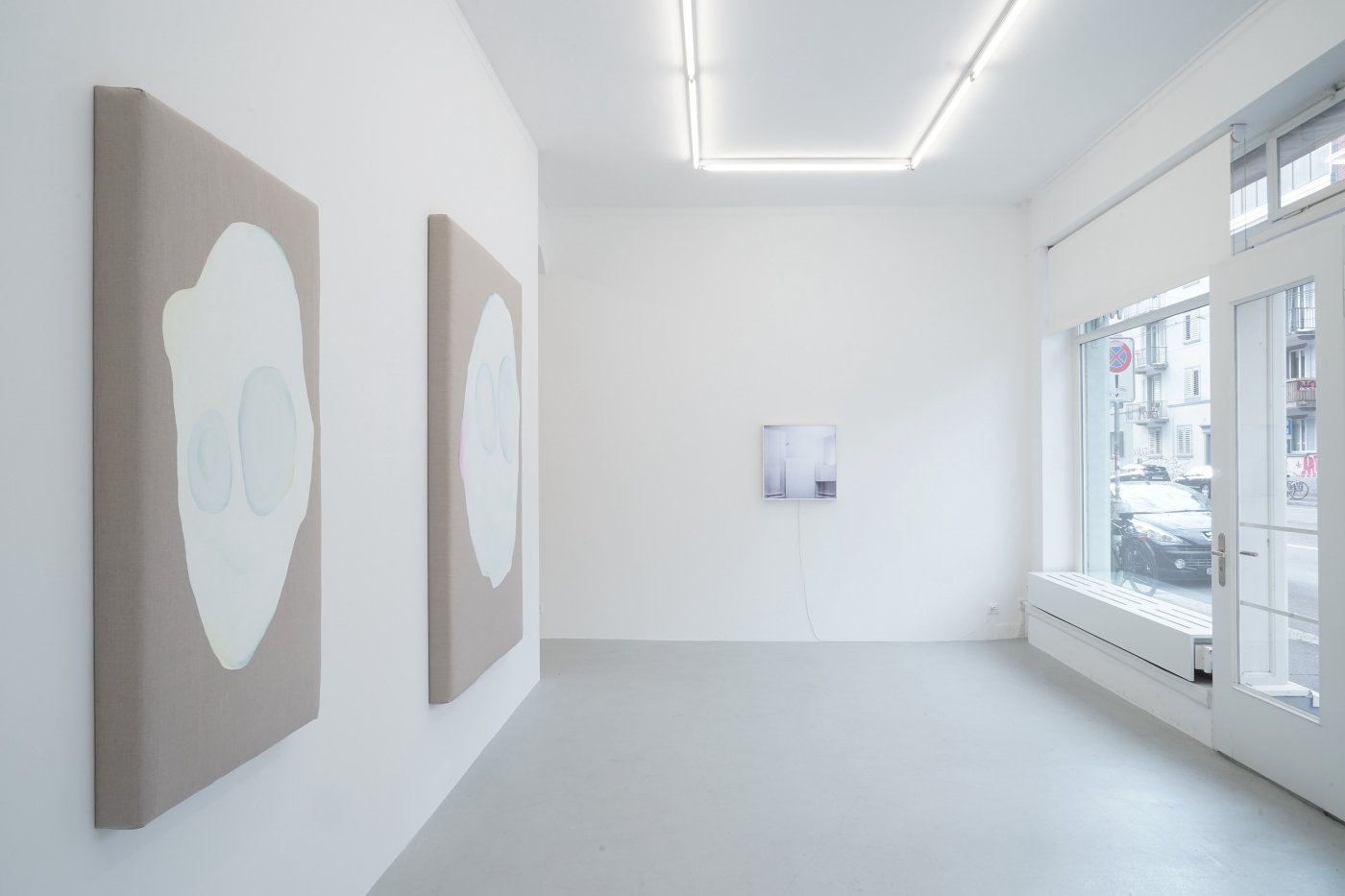 The exhibition begins brilliantly. Using prefabricated modular elements from USM Haller, wiedemann/mettler have installed the work Downhill from 2008 in the first room: A sloping terrain is marked out as a ski slope with ten red glowing slalom poles designed by the artist couple on a white hand-knitted blanket. It’s down the slope. The downhill sends us into wiedemann/mettler’s universe. Downhill offers various readings: the relocation of a ski slope into the gallery may be seen as an ironic statement on climate change. The leisure society cares little for our planet, which is beset by numerous crises. A quick rethink is needed before it is too late.

wiedemann/mettler distribute 48 ceramic porcelain figures on two slightly offset tables. The artist couple acquired these bric-a-brac figurines via sales platforms on the Internet and in second-hand shops. They surrounded these kitschy porcelain figures with a differently colored glazed ceramic mould and let porcelain and ceramic fuse together in the kiln. The striking ceramic shell breaks the triviality of the Nippes figurines and raises questions about authorship and authenticity. The body of the figures almost completely disappears under the ceramic layer in some works, questioning the cult of the body to which even these porcelain figures, at least the human ones, are subjected. Three upholstered velvet works hang on the walls. Using lye, wiedemann/mettler removed particles of color, achieving amazing color gradations and transitions. These three pictures correspond magnificently with the colorful figures and lend the room a cheerful mood.

There Does Not Exist

After the first two densely occupied rooms, the artist duo chooses a sparse hanging of four photographs in portrait format in the third room. The pictures reproduce interiors that do not exist in reality, but which nevertheless appear deceptively real because they were created in precise work on the computer through multiple superimpositions and overlays of different interiors. The constructed views, whose artificiality is not recognizable, fit congenially into the gallery’s premises and expand the architectural conditions.

In the fourth room, a small-format lambda print in a light box is juxtaposed with three paintings on padded raw canvas. What all the works have in common in different ways is that they make the invisible visible and only become concrete in the viewer’s imagination. The lambda print, in its reproduction of a white interior, reveals much, yet remains enigmatic and ambivalent. The situation is similar in the paintings. On the one hand, a head shape with eye sockets can quickly be guessed at in the representation, but on the other hand, the pure painting is superficial and the presumed representation recedes into the background. Paintings and the photography reveal an inner state, a mental condition in the pictures.

Courtesy of the artists and Lullin + Ferrari, Zürich